I’ve always been fascinated with emblems/badges/logos on manufacturers’ cars. As a kid, on long road trips, I would memorize the manufacturers badges and the model. I often wonder if that all led up to my long career in automotive. Either way, I chose to give a little history about the “Cadillac” and enjoy the CT4 review in my video (https://youtu.be/BkmTFBmN4VI).

Cadillac is among the first automotive brands in the world, fourth in the United States only to fellow Autocar Company (1897) and GM marques Oldsmobile (1897) and Buick (1899). It was named after Antoine de la Mothe Cadillac, who founded Detroit, Michigan. The Cadillac crest is based on his coat of arms.

By the time General Motors purchased the company in 1909, Cadillac had already established itself as one of America’s premier luxury car makers. The complete interchangeability of its precision parts had allowed it to lay the foundation for the modern mass production of automobiles. It was at the forefront of technological advances, introducing full electrical systems, the clashless manual transmission and the steel roof. The brand developed three engines, with its V-8 setting the standard for the American automotive industry.

Cadillac was formed from the remnants of the Henry Ford Company. After a dispute between Henry Ford and his investors, Ford left the company along with several of his key partners in March 1902. A new company called the Cadillac Automobile Company was established on 22 August 1902, re-purposing the Henry Ford Company factory at Cass Street and Amsterdam Avenue. It was named after French explorer Antoine Laumet de La Mothe, sieur de Cadillac, who had founded Detroit in 1701.

So, I would say that the various changes in the badge over the years was inspired by a Frenchman! Oh, la, la. 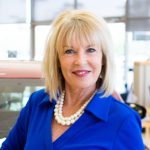 Founder of HER Certified and co-founder of Smart Women Series USA, Cathy Droz has test driven over 580 automobiles for manufacturers and reviewed them on hercertified.com, radio, TV, YouTube and in print.