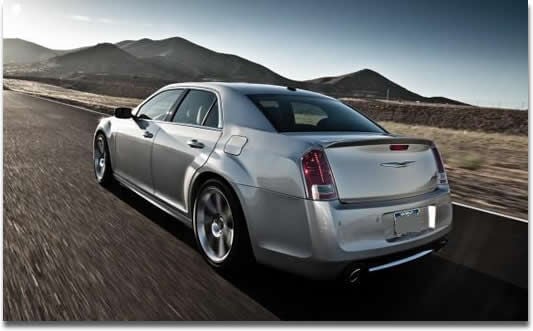 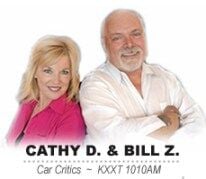 By Bill Zervakos and Cathy Droz, Two For The Road USA – The Chrysler 300 concept was introduced at the New York Auto Show in 2003 and the first production iteration roared into showrooms as 2005 models to accolades from the media and consumers alike. The 300 was a complete change from the front-wheel-drive 300M and Concorde predecessors with bold styling and most importantly, rear-wheel-drive.

When I first saw the test car pulling into my driveway, I was struck by how much the half-inch lower ride height impacted the stance of the car. The lines are aggressive and the profile is striking with just enough side cladding to set the car apart from the 300C. The front fascia features black chrome grilles with snarling LED daytime running lights. In the rear, you’ll find four-inch exhaust outlets and a nifty spoiler that tops off the look.

Inside the SRT8 is pure sports-luxury, replete with a leather-wrapped steering wheel with paddle shifters and lots of carbon fiber trim in the dashboard and console along with some nice chrome accents. The sport seats are upholstered in Alcantara leather and feature heating and ventilation with the SRT logo emblem on them. The brake and accelerator pedals are metal with rubber inserts and look very sporty. The gauges are large and easy to read and the center stack features a large screen making navigation or other functions easy to see.

The truth is though, that this car is all about the drive. At nearly 4,400 pounds it’s a huge, heavy sedan but it handled extremely well and while it’s no slalom machine, it corners very flat in the city but unfortunately I didn’t have an opportunity to get it on the track so I can’t vouch for its agility when pushed to the limit in turns.

What I can say, is that when you hit the throttle, the tires on the big sedan have a difficult time gaining traction and the sound coming from the exhaust is pure American V8, which is why I rarely had the stereo on.

A week was simply not enough time for me as this car definitely slides into the top 10 of my favorite cars. It’s big, bold and bad and, as I’m sure you can tell, I really like it. It doesn’t come cheap; basing at nearly $48,000, it doesn’t take many adds to hit $50,000 but it offers a lot of bang for the buck. So if you need a big sedan but lust after a performance car, look no further than the 2012 300 SRT8. It really is a beauty and a beast.