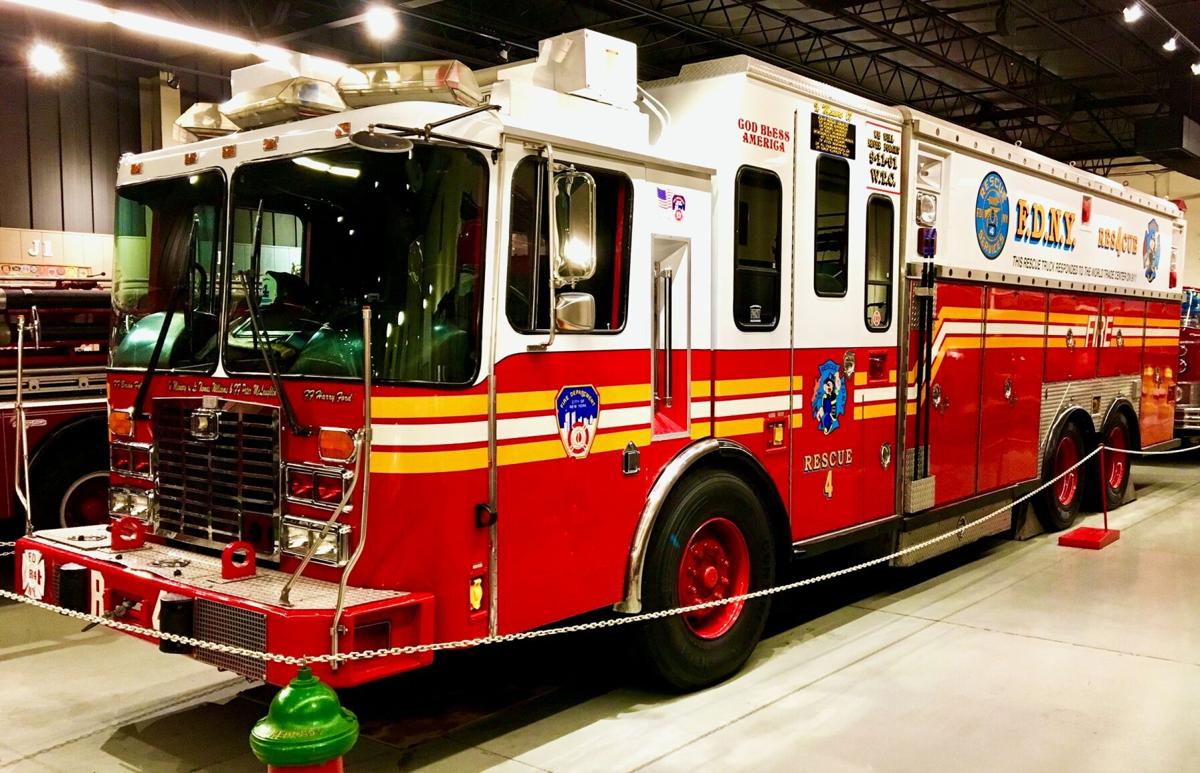 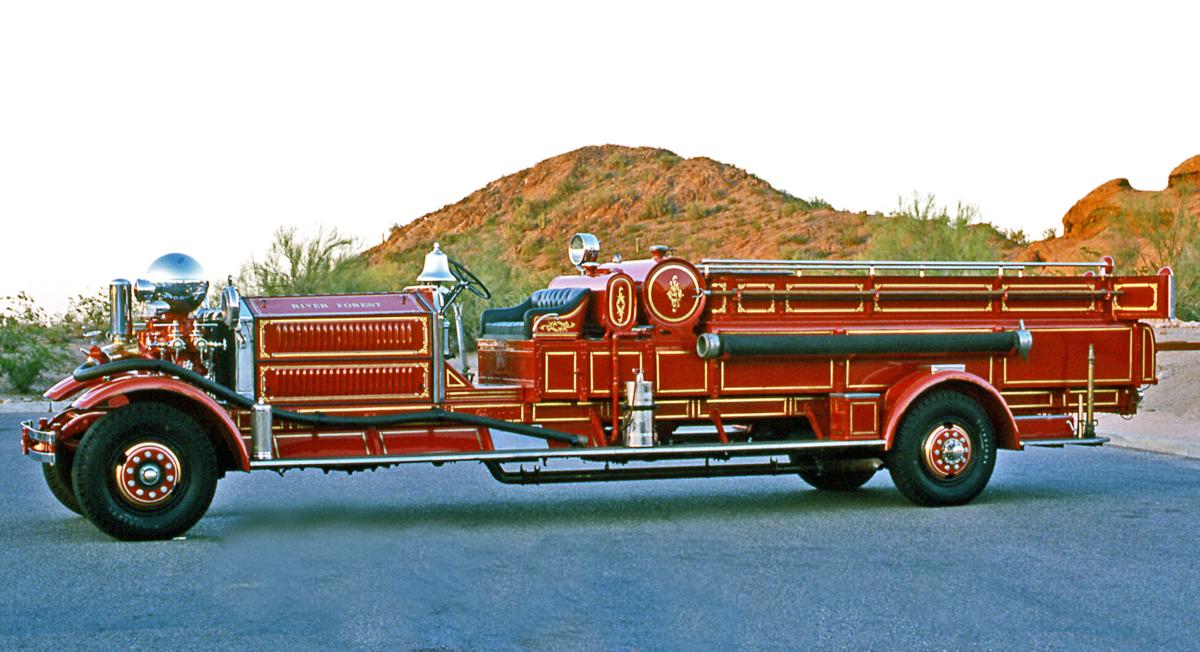 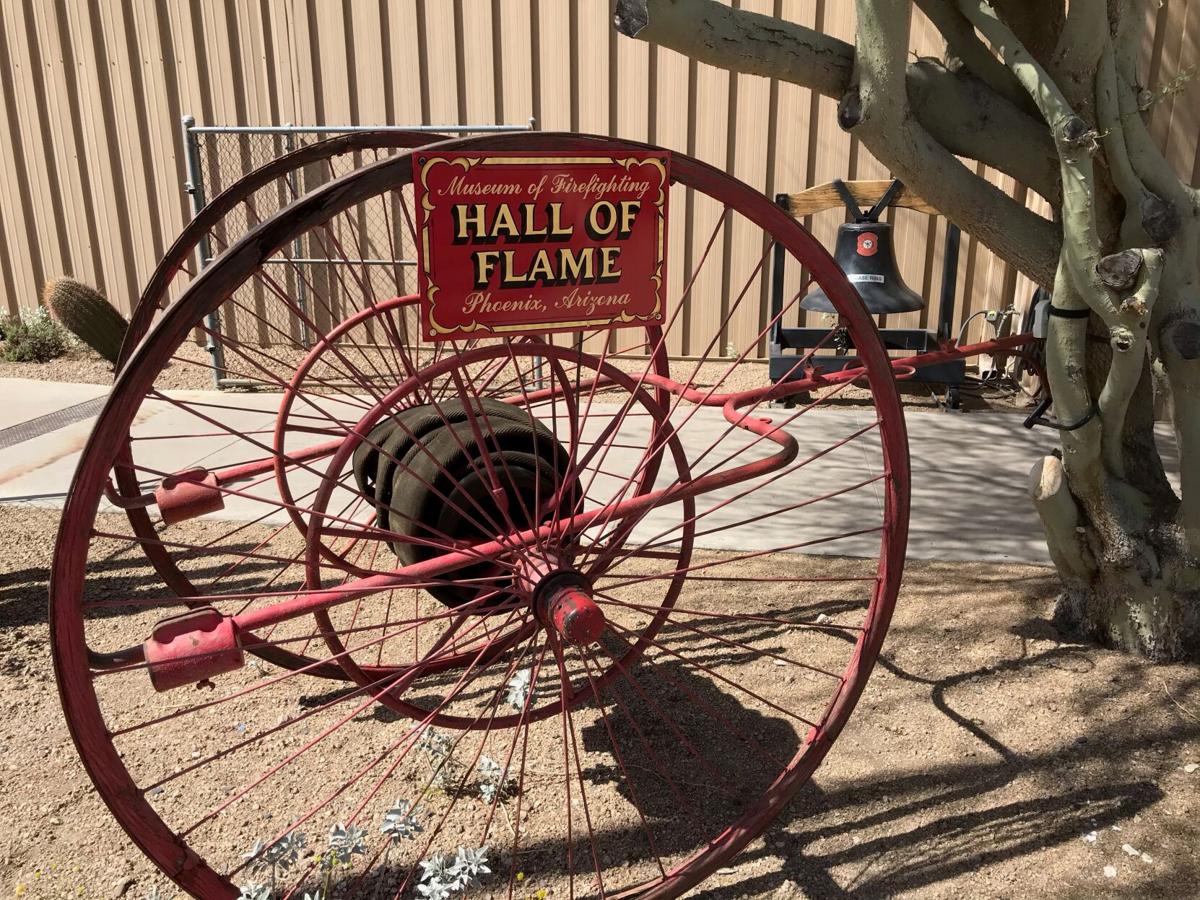 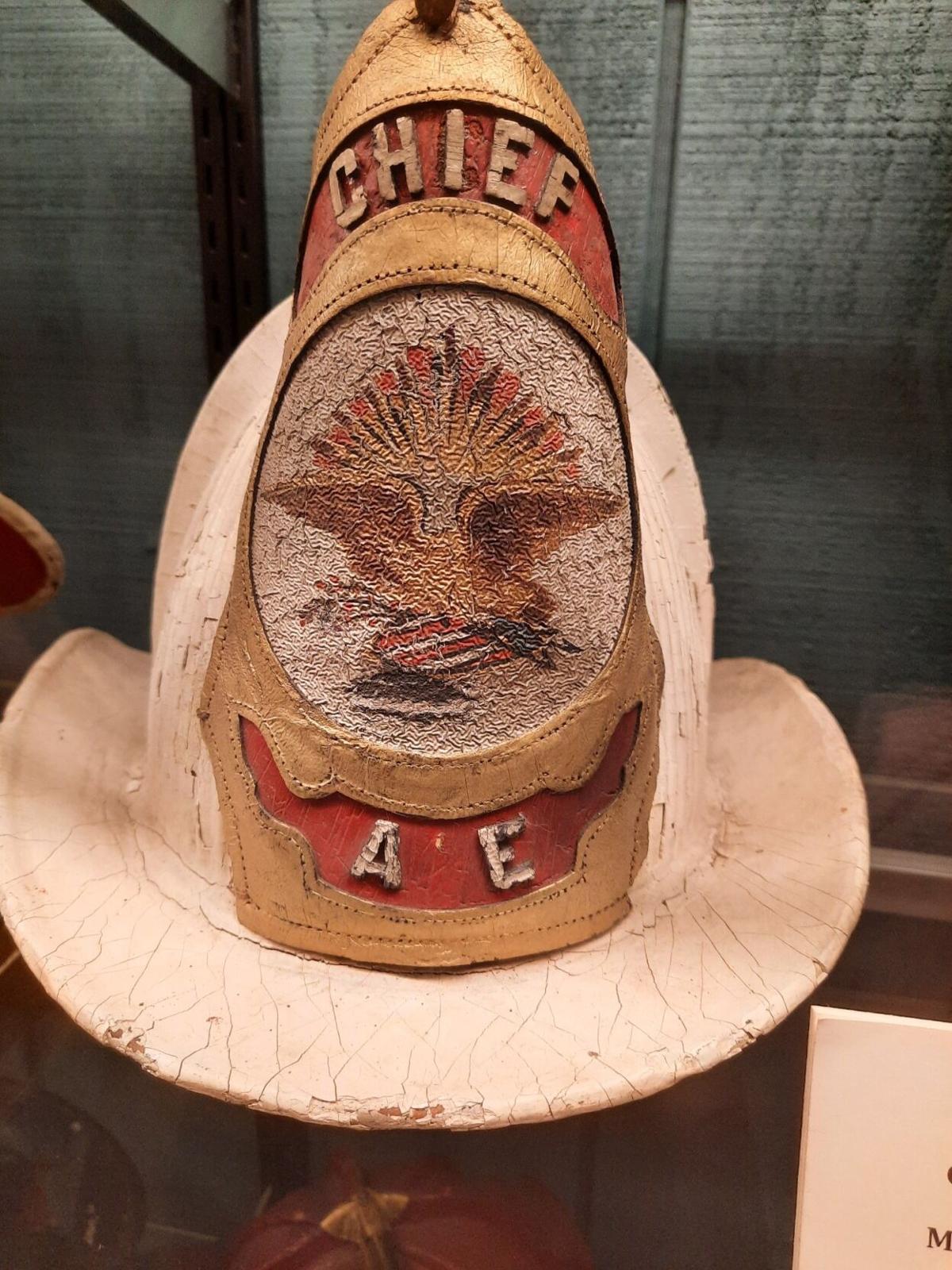 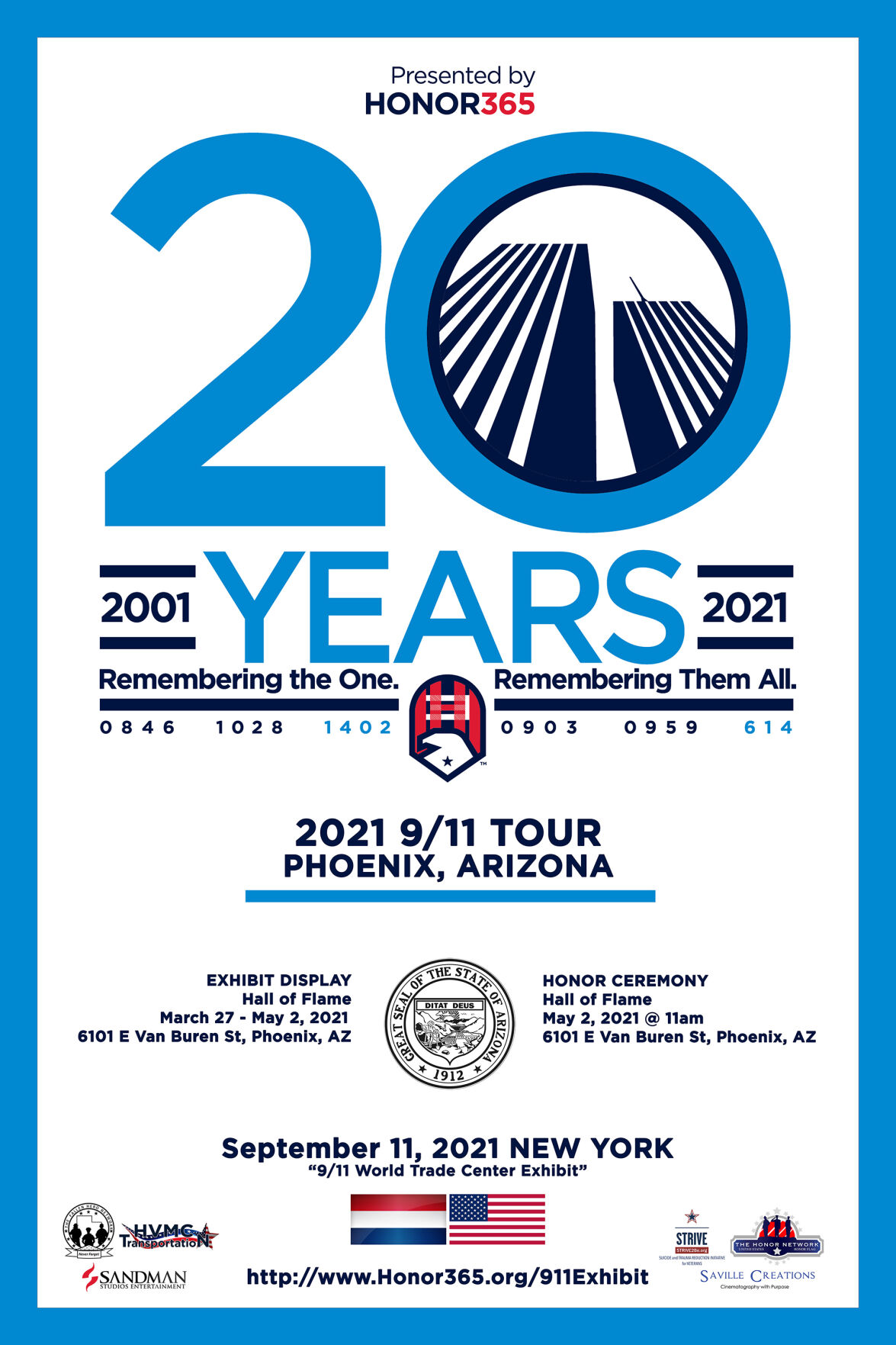 Although it receives visitors from all over the world, and hundreds of schoolkids a year on field trips, and is well-known among buffs of historic fire apparatus, the Hall of Flame Museum of Firefighting still considers itself one of Phoenix’s too-well-kept secrets. The world’s largest museum of firefighting history is a hidden gem known locally mostly by word of mouth.

The museum is located along East Van Buren, near the Phoenix Zoo, the ASU baseball stadium (Phoenix Municipal) and the Salt River Project building. It’s been in this location since the early ‘70s, after its relocation from Wisconsin. It was founded there in 1961 by businessman George Getz, Jr., due to an unusual Christmas gift he received in 1955.

How the Museum Came To Be

Getz had noticed a vintage fire truck alongside the road while driving through Illinois with his family that year and remarked admiringly of it. His wife Olive and son Bert arranged to buy the vehicle — a 1924 American La France Type 12 pumper — and gave it to him for Christmas as a rather elaborate gag gift.

The result, however, was the beginning of a lifelong fascination for Getz with the history and technology of firefighting, which led to the foundation, just six years later, of a museum in Kenosha, Wisconsin, devoted to preserving the traditions of the fire service. Getz dubbed the new facility the Hall of Flame, making it the rare example of a museum with a pun for name. Some years later, the Getz family moved their business and home base to the Valley and brought the Hall of Flame collection with them.

The Hall of Flame’s galleries are home to more than 100 pieces of larger apparatus, spread out over six galleries and ranging from the early 18th Century to the 21st Century.

Find an English hand pumper built in 1725, a spectacular hand pumper built in Philadelphia in 1844 that spent its career in Pawtucket, Rhode Island, and a parade carriage built in New York in 1870 that represented the Hotchkiss Fire Department of Derby, Connecticut, but looks more like what Cinderella rode to the ball in.

Explore fire trucks primarily from the first half of the 20th Century, including an 1897 Champion-Christie water tower from Toledo, Ohio and a 1919 Mack bulldog army truck converted into a fire truck by the fire department of Baltimore, Maryland by the addition of a previously horse-drawn ladder wagon and a chemical cart. This gallery is also home to a visitor favorite, the 1935 American La France 400 series pumper from Norfolk, Nebraska, with its memorable white paint job, and a 1921 Seagrave pumper that served the Phoenix Fire Department until about 1950, and was eventually rescued from the desert near Taos, New Mexico and returned to its former beauty by the Hall of Flame’s late restorer Don Hale.

Check out vehicles of more recent vintage, many of which are used in parades and other public events around the area, as well as an exhibit on the Phoenix Fire Department’s call center. It’s also the home of the FDNY’s Rescue 4, which responded to the World Trade Center in Manhattan on September 11, 2001, and whose entire crew was lost.

This gallery features a similarly solemn exhibit; one of the two transport buggies which carried the Granite Mountain Hotshots of Prescott, Arizona to the Yarnell Hill Fire of 2013, resulting in the loss of 19 members of that crew (the other vehicle is at the County Fire Museum of Los Angeles). The gallery also displays large ladder rigs and most of the Hall of Flame’s extensive, world-wide shoulder patch collection.

Exploring Beyond the Galleries

Along with the galleries, the Hall of Flame also has a video theater, which features a collection of antique helmets from around the world, a Hall of Heroes memorializing firefighters who have died in the line of duty or been decorated for bravery, and a wildland gallery devoted to smokejumpers, hotshots and firefighting aviation. Throughout the museum, visitors will find early insurance marks, historical fire extinguishers and more. At the rear of Gallery 4 there’s a hands-on children’s activity area, and, in Gallery 2, possibly the museum’s most well-loved piece: a 1951 American La France from Miami, Arizona that kids, and grown-ups, can climb aboard and play on.

These exhibits have all been familiar to visitors for many years. But during the Museum’s recent closure to the public due to the COVID-19 pandemic, between mid-March and the re-opening in early July, the Hall of Flame took the opportunity to make many improvements to the facility, as well as add new exhibits and expand existing ones. The Kids’ Area and several other parts of the Museum were repainted and/or refloored, and new décor was added.

There Are New Exhibits to Explore

New exhibits have been added, including a display depicting the evolution of EMS equipment in the Hall of Heroes, an exhibit devoted to early firefighting equipment in Gallery 1 and a display on the firefighting comic strip Smokey Stover in Gallery 2. Also, in Gallery 2 is an 8-to-1 scale model of a 1933 Ahrens-Fox C-T-4 pumper, donated to the Hall of Flame, along with its impressive display case, by the late Bert Hansen of Boulder City, Nevada. At the entryway to Galleries 3 and 4 is a new computer station allowing access to information on the Hall of Flame’s 7,000-strong collection of arm patches

The Museum is Also Has Virtual Offerings

Along with these enhancements, the Hall of Flame has also been attempting to increase its virtual profile, by presenting the collection through the Hall of Flame YouTube Channel, offering both video “tours” of many of the most prominent exhibits, and by continuing its educational mission with many story time videos of classic firefighting children’s stories like No Dragons for Tea, Hercules, Bravest of All, Fireboat, The Fire Cat, The New Fire Engine, The Too Little Fire Engine, Pink Fire Trucks and Curious George and the Firefighters, among others. Some of these stories, notably Curious George and the Firefighters and Pink Fire Trucks are available in Spanish as well. These videos are available for free on the Hall of Flame Museum’s YouTube Channel, as a homeschooling option in history or science.

The Hall of Flame Museum of Firefighting will be the Phoenix-area host for a traveling exhibit devoted to the World Trade Center and sponsored by veteran and first responder support service, Honor365.

The exhibit is a large, detailed model of the Twin Towers as they appeared in lower Manhattan before the devastating terrorist attacks; a reminder of what was lost on 9/11, depicted inspiringly intact. The model is the four-year project of a young artist and firefighter-in-training from Deurne, The Netherlands, Daan Van der Steijn.

Inspired by a television documentary on the attacks, Van der Steijn began work on his model at the age of 14 and completed it when he was 19. He comes from a firefighting family and is now in training to join the Deurne Fire Department. His World Trade Center project came to the attention of Honor365, a Utah-based organization founded in 2017 with the mission of ending suicide among veterans and first responders by providing referrals and services for therapy, education and training.

As part of a U.S. tour, ending in New York for the 20th anniversary of the attacks, the exhibit will occupy Gallery 3 at the Hall of Flame from March 27 until May 2. Phoenix is the longest stop on the tour.

Hall of Flame Museum of Firefighting