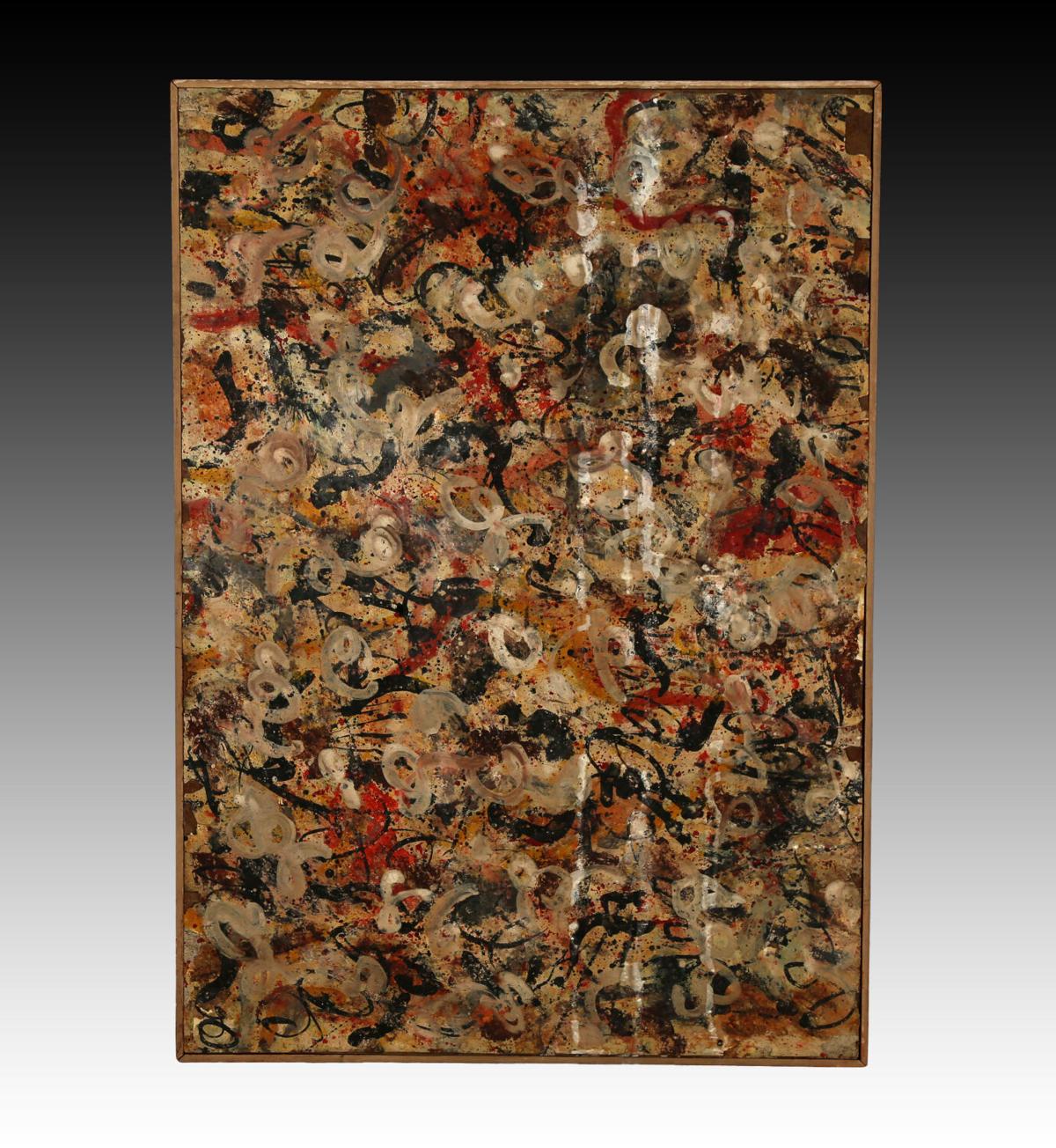 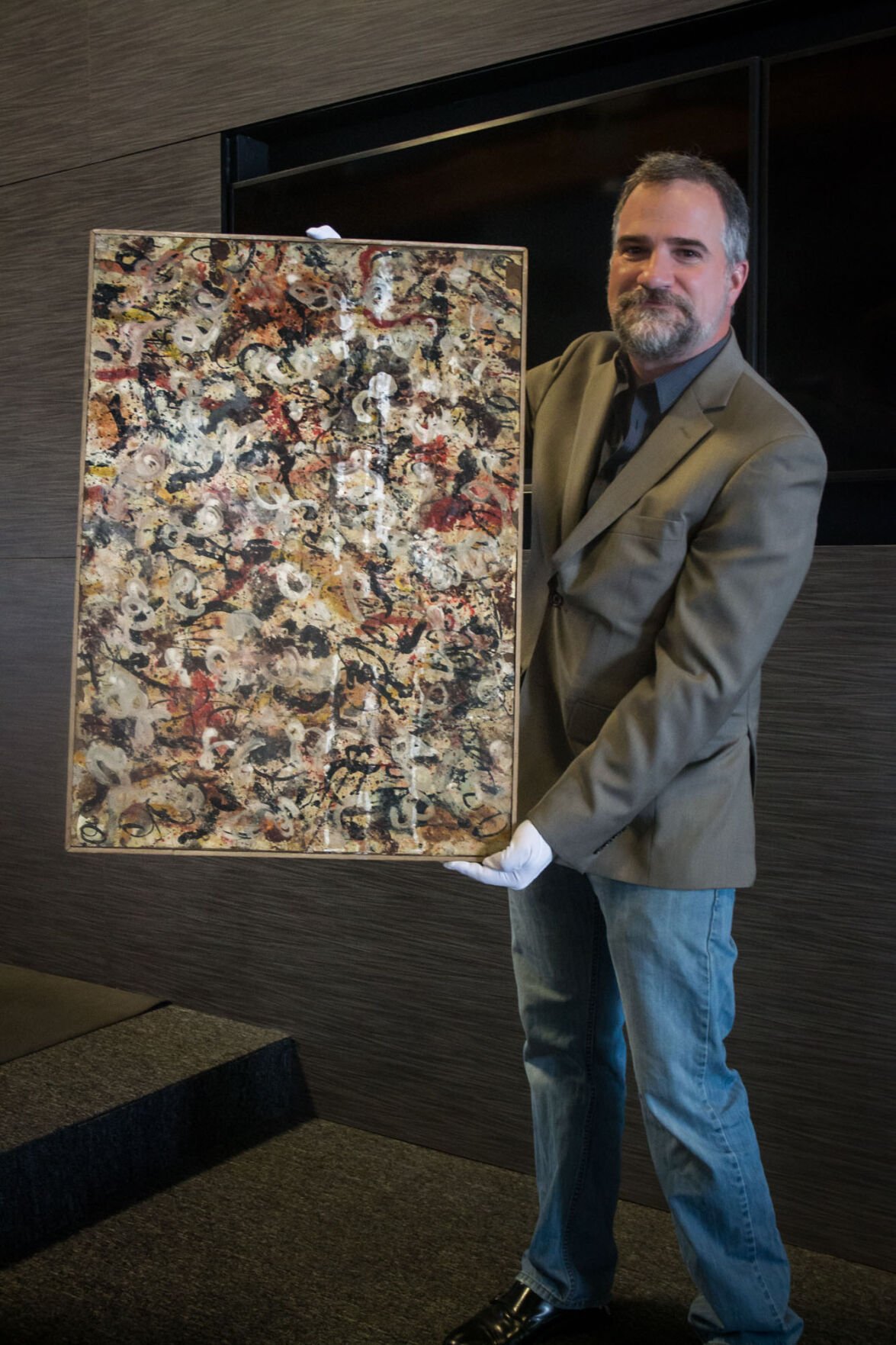 A rare, lost Jackson Pollock painting is going up for auction Tuesday, June 20, at J. Levine Auction & Appraisal after the Scottsdale-based auction house spent nearly 18 months and tens of thousands of dollars researching and authenticating the forensics and ownership history. Online bidding is available now, with live bidding slated to begin at 11am PT June 20. A private preview is available upon request. A free, public preview will take place Monday, June 19, from 4–7pm. Bidders must be pre-qualified in order to place a bid. The auction house is located at 10345 North Scottsdale Road in Scottsdale.

The abstract, untitled gouache painting measures 22 ½ x 32 inches with a forensic report stating, among other findings, that, “the dating of the painting to the mid-twentieth century is well established as no pigments or binding media introduced in the late 1950s and 1960s have been detected. Furthermore, the artist’s working materials and painting technique are illuminated.” The full forensic report is available.

The painting also comes with strong provenance, having come from the estate of Jenifer Gordon (Cosgriff) and bequeathed to her half-brother, who resides in an Arizona retirement community. Gordon (Cosgriff) lived in New York and was a known, lifelong friend of Clement Greenberg, an influential visual art critic most closely associated with American Modern art of the mid-20th century, Hazel Guggenheim McKinley, a mid-20th century modern artist and sister of Peggy Guggenheim, and Jackson Pollock. In addition, she also was in possession of various notable and listed art including authenticated pieces by Kenneth Noland, Jules Olitski, Hazel Guggenheim McKinley and Cora Kelley Ward.

“Interestingly, this estate first came to our attention when we were contacted to take a look at a signed 1992 L.A. Lakers poster,” said Josh Levine, owner and CEO of J. Levine Auction & Appraisal. “We ended up signing a contract to auction the contents of the estate, and that’s when we found many of the paintings stored away.”

One of the finds, a Kenneth Noland diamond-shaped acrylic painting titled “Replace!,” caught the attention of art collectors when J. Levine auctioned it in January 2016. A phone bidder from New Jersey won the piece for $110,000 hammer price. The Olitski, Ward and McKinley sold in the same auction.

Since January 2016, Josh Levine has been on a quest to authenticate the unsigned Pollock.

“I found Jenifer’s life story quite fascinating and began traveling down a wormhole of sorts as I read about past art shows and parties she attended, and read memoirs of Clement Greenberg’s wife. Clement was known to have nurtured Pollock and other abstract artists of that era,” Levine said. “I spent time on the phone interviewing artist Barbara McKay, who was friends with both Jenifer and Clement. I reviewed the letters of Hazel Guggenheim McKinley, Peggy Guggenheim’s sister. I found a lot of written material linking Jenifer to New York’s art scene and Pollock’s social circles.”

Describing his initial research as “maddening,” Levine hired a private investigative team and a forensic expert to help him put the pieces of the puzzle together.

“Based on their work and findings, I believe this painting was one of Pollock’s missing gouaches in his catalogue raisonné or from the period of 1945 to 1949,” Levine said.

Levine is well aware that scholars debate about the authenticity of Pollock paintings. The Pollock-Krasner Foundation does not authenticate paintings, and there have been many high-profile disputes in the past regarding whether or not a painting was an original Pollock.

“The forensic report really just reaffirmed what I already believed to be true based on the provenance,” Levine said. “I’ve spent hundreds of hours researching how this Pollock could end up here in Arizona, and I am confident that this is an original Pollock.”